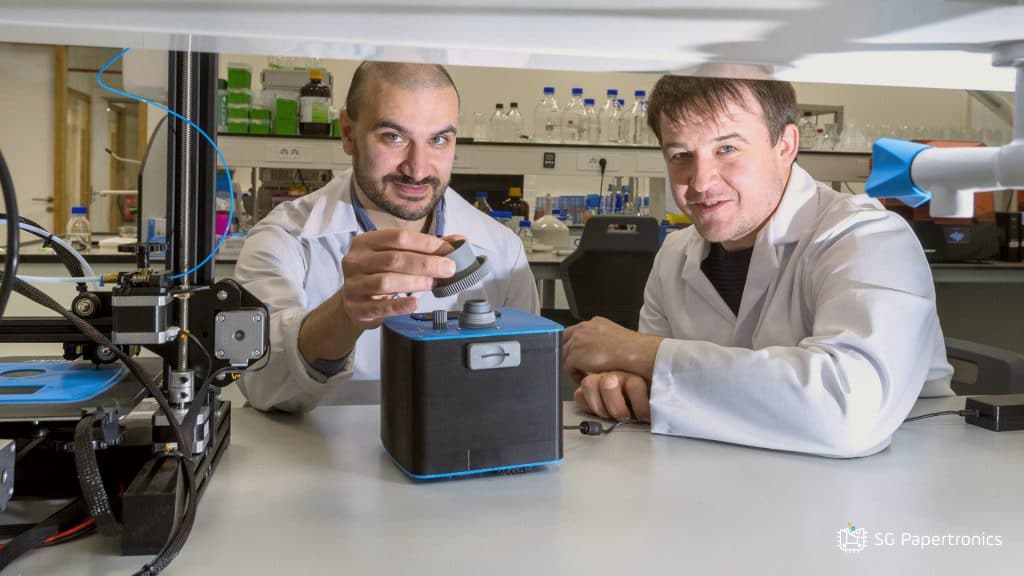 After a successful second round of funding late 2021, we have had a quick sit-down with COO/CMO Richard Rushby, telling us what the company is all about. From early-stage startup to a company with a bright future in a few years – Get to know SG Papertronics.

A few years ago, two PhD-students finished their research at the University of Groningen after which they were looking for a product-market fit. One of those researchers, Maciej Grajewski, initially met the other founder, Richard Rushby, at the VentureLab weekend back in 2019, where they decided to take SG Papertronics forward as a company. Having analyzed multiple sectors, the craft beer industry came up as the best target market for the launch of their device. Two years have passed, and they haven’t exactly been sitting still.

The value behind the device is similar to a coffee pod machine: “People want to make good coffee, but they don’t know how to be a barista and they don’t need to be a barista. They just want the end result.” By simplifying the way of doing things, you take away the skill and knowledge needed to produce the perfect outcome: a delicious cup of coffee. This is essentially what SG Papertronics does. SG Papertronics offers a lab-in-a-box style solution, eliminating the need for static machines or a specialized lab. When asked what SG Papertronics is all about, Richard came up with the perfect comprehensive description: “SG Papertronics is aiming to democratise wet lab testing, targeting the small- and medium sized enterprises (SMEs), starting with the craft beer industry”.

Looking at craft brewers, they are very passionate about the quality of their beer, but they are not (all) lab technicians. Setting up a proper lab in order to control the quality of the beer produced is expensive. Even when setting up a lab with the minimum requirements, you need someone with the knowledge, a lot of expensive equipment and a space to do so. SG Papertronics aims to take all of these uncertainties away by offering an affordable, portable, small footprint device that requires minimum knowledge of the process. In their own words: “The device is intuitive, portable and accurate.”. Moreover, the company provides the brewers with the technical expertise in the form of an established protocol and test pods dynamic to their situation and needs.

As Richard stated: “One of the strengths of the company is that we actually have very different backgrounds”. Maciej accomplished his PhD at the University of Groningen back in 2018. With a background in biotechnology and microfluidics, Maciej participated in multiple EU networks, before switching to his entrepreneurial career.
Richard has 10 years of experience in Project, Programme and Portfolio management. After moving to the Netherlands in 2016, he decided to return to the university and he did a Master in Business Administration focused on SMEs. On the back of that, his entrepreneurial career began after coming together with Maciej.

Richard focuses more on the operational and marketing side of things, whereas Maciej focuses on the technical aspects of the company. Since founding the company they now have a total of 5 staff working for or with the company as well as a constant rotation of interns from RUG and Hanze.

Back in 2019, Maciej and Richard got together and worked on an initial business plan which was pitched to investors in December 2019. COVID hit, but the first round of funding was successfully completed with the help of RUG Ventures and the NOM late 2020. The round allowed them to validate the business case and to turn the device from a lab prototype into something that could actually be used by a brewer.
After maturing the technology and demonstrating the interest in the device from the market, the company started to make the device market-ready. This enabled them to move to the second round of funding. Late 2021, the second round of funding was successfully completed with both RUG Ventures and the NOM reinvesting and being joined by G-Force and private investor Leon Ramselaar.

So what’s next? The company aims to bring their first device, the beer-o-meter, to market. With the second round of funding, the device and the initial test pods can be built, new additional tests can be developed and the company can start moving to production scale. As of now, the company is running an early stage pilot in order to optimize and finalize the customer experience. Based on feedback from multiple local brewers, the device seems to meet the market needs. The company has been asked to address the Craft Brewers Conference of the Netherlands in May about the importance of quality assurance and this is the perfect place to launch the Beer-o-meter.

At the moment, the main focus is the craft beer industry. The device is however a platform technology, so the company is continuously on the lookout for new opportunities to add value. The company has already worked together with EV Biotech in the region to look at potential solutions for glucose sensors for bioreactors. Another application of the device is looking at the possibility of an early stage liver disease assay, speeding up diagnosis and helping people to talk to specialists in time. For example, by having the device at hand at GP offices, a quick pre-screening can be done without running time consuming blood tests.

The wide application of the device is promising, and we can’t wait to see what the future holds for SG Papertronics.

Find out more about SG Papertronics